The Countdown is on to the 2016 Toyota Country Music Festival

The Countdown is on to the 2016 Toyota Country Music Festival

The countdown is on to the 2016 Toyota Country Music Festival, Tamworth. On Friday, 15th January, the Festival kicks off with John Williamson headlining the opening concert, marking 35 years since his hit single and first defining song 'True Blue' was released in 1981.

Williamson, an Australian country music icon, bucks tradition this year and will perform mid-show, ensuring the entire family get to enjoy his performance. He is looking forward to joining the Festival line up again as he reflects on a significant year. In 2015, he released his 50th album 'Honest People' and celebrated turning 70 with friends and family at his property 'Eloura'.

Tamworth offers a unique family friendly experience, not often encountered on the festival circuit, which is the reason so many people return year on year. Festival Manager Barry Harley explains the opening concert is a great example of this true Aussie hospitality.

“It really is a great chance to see some of the headline acts, and visitors appreciate that they can enjoy this experience for free” said Barry.

Another draw card to the opening concert is a breathtaking fireworks display which kicks off at 9pm, a perfect time for the kids.

The Toyota Country Music Festival will be held from Friday 15 to Sunday 24 January 2016 with the Toyota Golden Guitar Awards on Saturday 23 January 2016 at the Tamworth Regional Entertainment and Conference Centre. 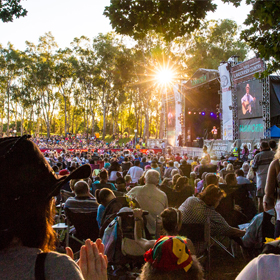