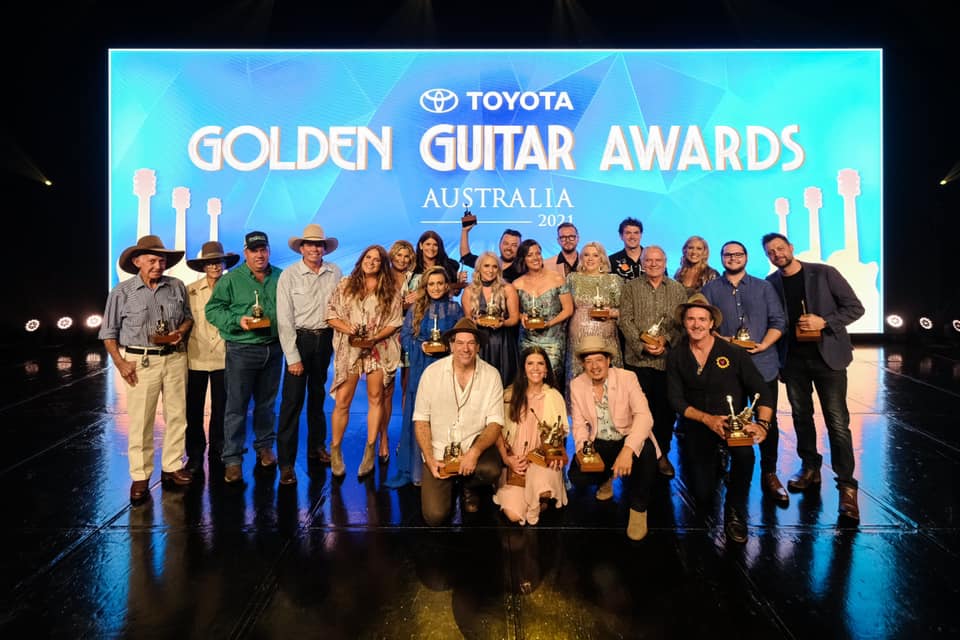 Tamworth Regional Council and the Country Music Association of Australia (CMAA) has presented the 2021 Toyota Golden Guitar Awards, celebrating the remarkable music and achievements that have come from the industry throughout 2020.

Delivered as a COVID-safe event on Saturday 23 January 2021 at the Tamworth Regional Entertainment Conference Centre (TRECC), this year’s Awards night was a little different from the usual star-studded, fan-filled event, with limited spectator spots available, a virtual red carpet, social distancing in place and many tuning in from afar.

The big winner for the evening was Fanny Lumsden, who took home five awards from her seven nominations. Her album Fallow, produced by Matt Fell, saw the artist collect gold for TOYOTA ALBUM OF THE YEAR, ALT COUNTRY ALBUM OF THE YEAR and FEMALE ARTIST OF THE YEAR. Lumsden also took out the titles of APPLE MUSIC SINGLE OF THE YEAR for her song Fierce and CMT VIDEO OF THE YEAR for Mountain Song/This Too Shall Pass which she directed together with her husband, Dan Stanley Freeman.

The now eight-time Golden Guitar Award winner took to the stage to perform Fallow, her title track from the award-winning album.

COUNTRY MUSIC CAPITAL NEWS GROUP OR DUO OF THE YEAR and CONTEMPORARY COUNTRY ALBUM OF THE YEAR went to The McClymonts for their 6th studio album Mayhem to Madness, bringing the multi-award-winning sisters to a total of 15 Toyota Golden Guitar Awards. It was also announced last week that Mayhem to Madness was the second highest selling new Australian country album of 2020 and the band opened the show with their anthemic #1 single ‘I Got This.’

Luke O’Shea is also celebrating tonight after being awarded TRADITIONAL COUNTRY ALBUM OF THE YEAR for his album There in the Ochre and taking home HERITAGE SONG OF THE YEAR with Kevin Bennett for their collaboration, Happy Australia Day.   The two awards take O’Shea’s Golden Guitar Award wins to 13.

Travis Collins took home MALE ARTIST OF THE YEAR for his album Wreck Me and the highly contended NEW TALENT OF THE YEAR was awarded to acclaimed singer-songwriter, Melody Moko.

Hosted by two-time Golden Guitar Award winner Andrew Swift and five-time winner Catherine Britt, the COVID-safe event was a celebration of the music, success, and resilience of the industry. Entertaining live and virtual audiences from near and far were on-stage performances from Casey Barnes, The McClymonts, Travis Collins, Dean Perrett, and Melody Moko.

Multi-award-winning singer-songwriter, Shane Nicholson won gold for APRA AMCOS SONG OF THE YEAR for The High Price of Surviving co-written with Leyon Milner; and COCA-COLA INSTRUMENTAL OF THE YEAR was awarded to The Weeping Willows for their song Prelude.

BUSH BALLAD OF THE YEAR was taken home by Dean Perrett’s Six Decks to Darwin that he wrote together with Kelly & Marion Dixon and Ryan Garland; and Kristy Cox was awarded BLUEGRASS RECORDING OF THE YEAR     for Finger Picking Good (featuring Tommy Emmanuel CGP).

Toyota Australia’s Chief Marketing Officer, Mr John Pappas said: “Toyota has been a proud supporter of country music for 29 years, and we would like to congratulate all of the finalists and winners for their fantastic work that continued to prosper throughout a challenging 2020.

“As we head towards celebrating 50 years of the Festival and Toyota Golden Guitar Awards next year in January 2022, we look forward to continuing our support of country music in Australia and seeing what magic is created by this industry in the coming year.”
Toyota Golden Guitar Awards Executive Producer Mr Peter Ross said it has been an honour to provide the industry with a much-needed celebration.

“The 49th Toyota Golden Guitar Awards were very different from what we could have ever envisaged when we began planning this year’s awards. Delivered as a fully COVID-safe event, the easy option would have been to cancel the show, but it was this year more than ever, that we truly needed to demonstrate our strength and celebrate the continued success of this industry, and we have been proud to be able to do so.”

While applauding the work of the nominees and winners, this year’s Awards also highlighted the 50th career anniversaries for The Bushwackers and John Williamson, featuring special performances in celebration of this incredible milestone for these two highly recognised performers. The Bushwackers were also honoured for their energetic writing, performing, recording, and celebrating of Australian heritage by being announced as the 2021 inductees into the Australasian Country Music Roll of Renown.

Chairman of the Country Music Association of Australia, Mr Dan Biddle said: “Tamworth is the place that annually embraces the emerging, supports the established, and celebrates the long-standing careers of country music artists in Australia. Despite the COVID climate we have all lived through in 2020, there was no exception to this tonight!

While the 2021 Toyota Country Music Festival, Tamworth was cancelled due to COVID-19, we encourage everyone to save the date for 50th anniversary of the Festival, set to take place from 14 – 23 January 2022.

For more information head to www.tcmf.com.au/awards