The 2017 Queen of Country Music is Taylor Fletcher

The 2017 Queen of Country Music is Taylor Fletcher

Tonight Taylor Fletcher was crowned the 2017 Queen of Country Music at a gala dinner, presented by Zonta at the Tamworth Jockey Club.

Taylor is a young professional from Tamworth, who relocated to Sydney in 2007 to complete a degree in Media, Communications & Journalism.  In 2015, Taylor moved back to Tamworth to enjoy the clean country air and reap the benefits of what Tamworth has to offer.  She chose to participate in the Queen Quest so that she would be a positive ambassador to the Tamworth region.  Taylor was sponsored by the Westpac Rescue Helicopter Service and is also an active member of the Rotary Club of Tamworth Sunrise.

As winner of the 2017 Queen of Country Music Quest Taylor will receive over $10,000 in prizes including a trip to Tamworth’s sister city, Gore in New Zealand where she will represent Tamworth at the 2017 Gore Country Music Festival.

Other announcements on the night included Tara Grant, sponsored by RNJ Transport being crowned as the 2017 Princess of Country Music and taking home over $5,000 in prizes.  Tara also took home the award for best social media presence and Maddy Robinson, sponsored by Transport Network Australia was voted ‘Miss Congeniality’.

President of the Zonta Club of Tamworth Deb Maes said: “The Queen of Country Music Quest is the perfect embodiment of what we do at Zonta by empowering women through service and advocacy and we are very proud of all the entrants.”

All the entrants receive $3,000 in prizes and both the Queen and Princess will be ambassadors for Tamworth and the region throughout 2017, spending the next 12 months involved in a range of high-profile civic and community events, guest speaking engagements and corporate and festival functions.

Now in its 32nd year, the Queen of Country Music Quest empowers young women from the Tamworth region to develop important personal and professional skills like public speaking, networking and community service. 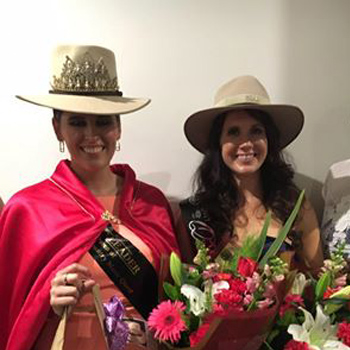