The 2016 Toyota Country Music Festival Tamworth has been awarded Silver at the Regional Tourism Awards event on Saturday night in Echuca-Moama in the Festival and Events category.

The award recognises festivals, events and exhibitions that attract 50,000 visitors, enhance the profile and appeal of the destination in which they are held and create a significant economic impact for the destination.

Barry Harley, Manager – Events said he was thrilled with the award. “This award is recognition of not only many months of hard work by the events and marketing team, but also of great collaboration with the multiple stakeholders that make our festival a winner.

“The festival injects approximately $51.6m into the Tamworth region’s local economy and it is that support of various businesses in our community that assists to make it so successful.”

“Entering the Inland NSW Tourism Awards is not only a great way to showcase the festival to our peers, but it is also a way we can benchmark our performance so that we can raise our standard and provide a more fulfilling experience for our visitors each year” said Barry Harley, Manager, Country Music Unit.

The Toyota Country Music Festival Tamworth celebrates its 45th year in 2017, a brilliant milestone for such an iconic event.

The 2017 Tamworth Country Music Festival will be held from 20-29 January and will as always showcase the best in Australian country music talent, and also provide an avenue to promote the Tamworth region as a must visit destination year-round.

“We are adding some exciting elements to the Festival next year and we can’t wait to showcase Tamworth!” Mr Harley concluded.

The Nundle Woollen Mill has also been awarded Bronze in the Cultural Tourism category and was deservedly awarded the Judges Award at the event on Saturday night.

Tamworth Regional Council will now enter the 2016 Toyota Country Music Festival Tamworth into the NSW Tourism Awards. The winners will be announced at a gala event in November in Sydney. 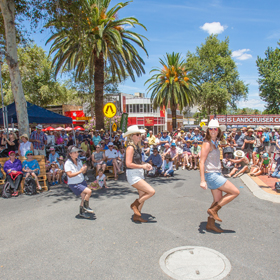