Tamworth Regional Council is excited to announce that Tamworth has been selected to join over 50
cities around the world as BalconyTV’s newest location of choice.

Founded in June 2006, BalconyTV is a leading daily online viral music show that features bands,
musicians and other variety acts on balconies around the world.

It provides a unique global platform not only for artists but also for the location, with Tamworth now
staking a place amongst the likes of Nashville, London and Milan.

Tamworth Regional Council Country Music Manager Barry Harley is ecstatic that Tamworth has been
selected as the newest location, joining only five other locations around Australia.

“Tamworth is well known in Australia as the Country Music Capital and now, slowly but surely, we are
making inroads to promote this great region on the world stage.

“Council will produce a fortnightly video showcasing local and touring country-music talent which will
be showcased on BalconyTV and streamed worldwide.”

Award-winning country-music star Aleyce Simmonds has been selected to host Tamworth’s channel
and is excited for the opportunity.

“This is such a unique initiative, particularly for upcoming artists who are trying to get a foot in the
door. I’m excited to meet and interview a new artist each fortnight and show the world what Tamworth
has to offer”

The Tamworth BalconyTV crew went through a selection process to ensure Tamworth is placed on
the map, shooting a pilot video in April.

“It was so much fun filming the pilot and we are over the moon that we’ve been successful in securing
a place, joining the likes of London, Zurich and Rome in promoting our country music artists,” said Ms
Simmonds.

The pilot episode is now available by visiting www.balconytv.com/tamworth. Artists looking to be
included on the channel can contact 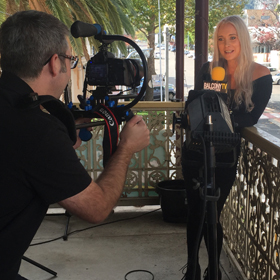