The accolades keep rolling in for the 2016 Tamworth Country Music Festival which has now been announced as a finalist in the 2016 Regional Tourism Awards’ Festival and Events category. The awards recognise excellence in tourism and this is the 5th year the Festival has been nominated.

Tamworth Region Mayor Col Murray said to be shortlisted again this year is a fantastic achievement for every member of the Festival team.

“The 2016 Festival was exceptionally well run which was reflected in the positive feedback we received from the local community and also visitors to the Festival,” said Cr Murray.

“In 2016, we had over 50,000 visitors enjoy the Festival experience which resulted in an estimated $51.6M boost to the local economy. The ability for a regional town to host an event like this is just outstanding and being named as a finalist in the Regional Tourism Awards is a great honour.”

“All roads lead to Tamworth in January and this year was no exception. For ten days, we worked with local stakeholders to put on a fantastic line-up of artists and entertainment to suit all tastes.

“The great thing about our Festival is our ability to offer free concerts, headlined by the best artists in Australian country-music,” said Mr Harley.

“To be announced as a finalist is a credit not only to the Festival organisers, but also to the artists who choose to perform in Tamworth and help create the electric atmosphere that keeps people coming back year-on-year.”

The winner will be announced at a Gala Dinner to be held in Echuca Moama, home to the largest working Paddle steamer fleet in the world, on Saturday 23 July, 2016. 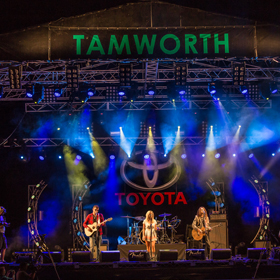