Smoking no longer a part of the Festival

Smoking no longer part of the festival

The decision to provide visitors to this year’s Festival with a smoke-free environment follows recent changes to the Smoke-free Environment Act 2000 which bans smoking in a number of public outdoor areas and within 4 meters of any outdoor dining areas. It is also in keeping with Tamworth Regional Council’s decision to ban smoking in large sections of Peel and Fitzroy Streets - which in turn makes up a big portion of the Festival footprint.

"Given the Country Music Festival’s reputation is as a fun-filled family event, it is fantastic news that the majority of event areas will now be smoke free. Prohibiting smoking in outdoor areas not only reduces people's exposure to secondhand smoke but helps make smoking less visible and less socially acceptable."

The decision to make the Toyota Country Music Festival Tamworth 2016 smoke free is one that NSW Health has thrown its support behind with Tobacco Officers headed to Tamworth to help Council and Festival staff educate the public, monitor compliance and issue cautions to those seen to be breaching the outdoor smoking bans.

“This will be NSW Health’s fifth visit to the Tamworth Region since the smoke free outdoor dining laws came into effect in July last year, and we are informed that the majority of premise comply” continued Cr Murray.

“Having the additional manpower in town during the Festival helps accelerate the education process. Regulatory signage has been installed in the sections of Peel and Fitzroy Streets where smoking is prohibited and we have our “nobody smokes here anymore” campaign signage appearing on Festival big screens, on rubbish bins throughout the event and on information hand outs”.

“Of course anyone who blatantly disregards no smoking signage or a warning issued by a regulatory officer, risks a fine of up to $300” he concluded.

- Tamworth CBD - Peel Street (between Bourke Street and Hill Street); and Fitzroy Street
(between Kable Avenue and Marius Street)
- Toyota Park and surrounds including the Adventure Playground
- Toyota Fan Zone
- Within 4 metres of a pedestrian access point to a Council owned and/or operated buildings
- Within 4 metres of alfresco (outdoor) dining areas and entries to licensed premises 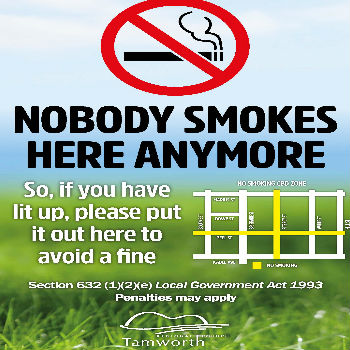