Some more Tamworth CBD roads will close to traffic tomorrow morning because of the 2016 Toyota Country Music Cavalcade, the spectacular street parade which is one of the highlights of the Festival.

Tamworth Regional Council staff will be at work from about 3am Saturday to ensure the series of barricades and road closed signs are in place by 6am.

In addition to existing road closures, there will be some additional temporary closures of CBD roads to traffic from 6am to 11am on Saturday 23 January.

The Peel River Bridge will also be closed to traffic on the western bank of the river for a short time. Any motorist needing to access the CBD before 11am on Saturday should use Scott Road or Jewry Street.

A flyover by BAE Systems Flight Training Tamworth aircraft will signal the start of the cavalcade at 9am and the procession of floats, trucks, marching bands, cars, horses and dancers will make its way from the roundabout at the intersection of Peel and Roderick streets through the CBD along Peel Street to finish at O’Connell Street adjacent to Viaduct Park.

This year His Excellency General The Honourable David Hurley AC DSC (Ret'd), Governor of NSW and Mrs Linda Hurley will be part of the parade as well as Tamworth Region Mayor, Col Murray and Mrs Carol Murray plus the newly-crowned 2016 Queen of Country Music and Princess.

Festival-goers with an access disability can use a specially dedicated area in front of the Ray Walsh House forecourt to view the cavalcade. 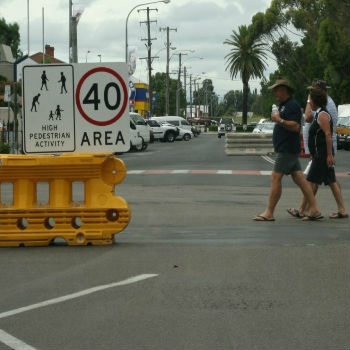