The Australian Country Music Foundation (ACMF) ‘Hall of Fame’ will officially open this Saturday, 16th January. During the ceremony, the 2016 recipients of the Hands of Fame and Broadcasters Hall of Fame will be announced.

Country stars Dianne Lindsay and Lindsay Butler will cut the ribbon after which Tamworth Region Mayor, Col Murray will ceremonially hand over the keys to ACMF President Eric Scott, cementing the partnership between Tamworth Regional Council and the Foundation.
The Hall of Fame is now located at the former Visitor Information Centre, on the corner of Peel and Murray Streets, a venue provided by Council to ensure the impressive collection remains within Tamworth.

The volunteers lead the move to the new location, donating endless hours to ensure the doors are officially opened in time for the 2016 Toyota Country Music Festival, Tamworth.

“Preserving the history of Australian country music is vital in ensuring the future of the industry” explained Cr Murray.

“Allowing visitors to Tamworth the opportunity to understand the history of the country music industry enhances their visit, especially during the Festival” added Cr Murray.

The ceremony will take place at the guitar-shaped building, on the corner of Peel and Murray Streets, at 10.30am. 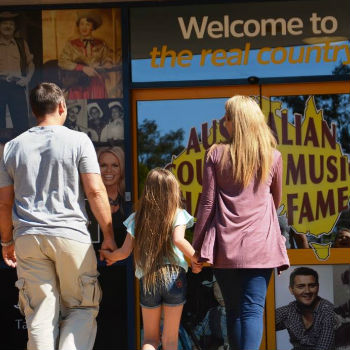