It doesn’t get better than Tamworth in 2017!

It doesn’t get better than this! 10 nights of free concerts all set for Toyota Park in Tamworth in January

Toyota Country Music Festival Tamworth fans will get to enjoy an experience like no other in January 2016 with 10 nights jam packed full with free concerts, in Tamworth's biggest venue, Toyota Park.

Kicking off the Toyota Park line-up is the official opening concert on Friday 15 January 2016 where festival fans will experience one of the biggest opening line-ups ever. Headlined by John Willamson and including performances by Felicity Urquhart, The CMAA Academy, Luke O'Shea and Amber Lawrence, Roo Arcus, Kirsty Lee Akers, Brothers 3, Mickey Pye and Simply Bushed it will be a HUGE night of country music.

For fans that are into Keith Urban, Taylor Swift, Lady A and the like, then Tuesday night's 'Live, Loud and Free' concert will not disappoint. With artists such as Jared Porter, Kaylens Rain, Caitlyn Shadbolt, Victoria Avenue, Kaylee Bell and Melanie Dyer performing it's going to be a great summer's night of rock and pop inspired country music.

Dog Whistle Music Director, Tom Inglis said he is really excited to be able to showcase such amazing young talent on the big stage in Toyota Park and said the artists are really looking forward to putting on a great show.

“For fans that dig the modern contemporary country sound, they're gonna love our original tunes. It's gonna be a hot night!” artist Jared Porter said.

The Bush Ballards “Back to the Bush” show is on Wednesday followed by Americana on Thursday.

Toyota's Rural Australia Concert with Lee Kernaghan is scheduled for Friday 22 January 2016 and will showcase the Grand Finalists of Toyota Star Maker competition as well as the 2015 Star Makers themselves.

Saturday will feature the best of the Toyota Country Music Festival buskers who will battle it out to be crowned the 2016 Busking Champion and Sunday will wrap up the Festival with the official closing concert. Details of which will be released very soon.

The Toyota Country Music Festival Tamworth offers one of the best festival experiences in the world. It is proudly supported by the NSW Government though its tourism and major events agency Destination NSW. 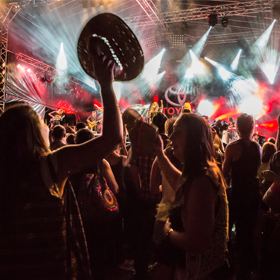