Finalists in the 2016 Australian Country Music People’s Choice Awards, to be staged in Tamworth this January, have been announced.

Leading the finalists list are regular winners Brothers3 and Graham Rodger, together with a number of past winners, numerous previous finalists and a raft of newcomers.

Previous finalist Nathaniel O'Brien, who sadly died in a tragic car accident just recently and who was certainly a star on the rise, has been voted by his fans among the finalists for Best Male Vocal.

Speaking on behalf of the Awards organisers, Bob Kirchner said he was delighted with the voter support of the 2016 People's Choice Awards.

"It never ceases to amaze us the number of artists, songs, albums, and so on, that people vote for in these awards. We are especially proud of the fact that we don't restrict voting to a small number of pre-selected finalists and are always gratified to see the huge number recognised by their fans.

"Once again in the current awards, there were literally hundreds nominated... and so many votes cast that we had to extend our nomination list once again to 10 in each category rather than the more standard five," he said.

The 2o16 Australian Country Music People's Choice Awards will run from 7pm Thursday January 21 in the Northwest Church Auditorium at the corner of Anne & Kathleen Streets, South Tamworth – a gala awards presentation featuring performances from a number of finalists.

Winners will be announced in 11 categories including two dedicated to the Australian country music radio sector.

Tickets can be purchased here... https://peopleschoice2016.eventbrite.com

A full listing of finalists is included below.

Further media information available from Bob Kirchner on 0419 998 386 or by return email.

Most Popular Radio Station or Program 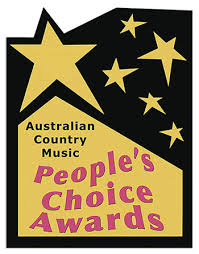