This year, in an exciting move, Coca-Cola Country will be joining forces with the Capital Country Music Association’s National Talent Quest (CCMA) to present an eight-day schedule of opportunities for artists of all ages and all stages to perform and compete in the luxury of the famous Tamworth Town Hall with their very own professional backing band.

Local Coca-Cola Amatil District Sales Manager John Eggins said, “This is an exciting opportunity to really encourage and support emerging Aussie talent as we celebrate our 40-year partnership with Toyota Country Music Festival. We value this partnership with Tamworth and are proud to keep building it together.”

The CCMA has been providing the opportunity for artists to compete in categories from juniors through to “golden oldies” since 1966 and President of the CCMA Steve Newton said: “it was a natural blend to include the CCMA’s junior and senior talent quest into the Coca-Cola Battles.”

“With changes in society and technology that have been challenging traditional talent quests all over Australia, it is exciting to be able to combine two giant talent quests into a one-stop-shop for all aspiring country musicians whether competing or those who just want to walk up and sing.”

Following the finals of each Battle, the legendary CCMA Jamboree will run, also in the Town Hall where all solo winners from the week’s activity will be invited to compete at the Jamboree for the titles of Overall Junior and Senior Champions.

All Grand Finals will be held after the Toyota Cavalcade on Saturday, 27 January 2018 from 10 am and winners will receive trophies and cash prizes with some offering a paid gig as part of the prize. 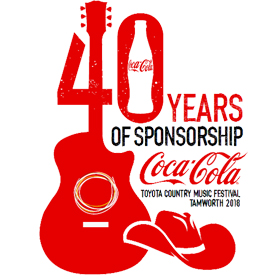