Applications for the annual Toyota Country Music Cavalcade open today with Festival organisers expecting it to be one of the biggest yet.

“Last year there was an increase in the number of floats in the Cavalcade and despite the rain thousands still turned out to experience it. With the number of enquiries already received we are expecting to see entries increase again this year and we couldn’t be happier about it,” Barry Harley, Manager Country Music and Events, Tamworth Regional Council said.

The theme for the 2017 Cavalcade it – ‘It doesn’t get better than this!’ enables participants to design their float in a way that demonstrates their version of why it doesn’t get any better than the Toyota Country Music Festival, Tamworth.

Mr Harley says “the highly anticipated and extremely popular event is a fantastic opportunity for local and regional groups to be a part of one of the biggest events in the Festival program and with a cash prize of $3,000, it’s a great way to be rewarded for participating.”

The Toyota Country Music Cavalcade is set for Saturday, 28 January 2017 and will start at 9 am from the corner of Peel and Hill Streets, Tamworth. Entry forms can be downloaded from the official Tamworth Country Music Festival website www.tcmf.com.au or by contacting the Tamworth Regional Council on 02 6767 5555.

The Toyota Country Music Festival, Tamworth is on from Friday 20 to Sunday 29 January 2017. 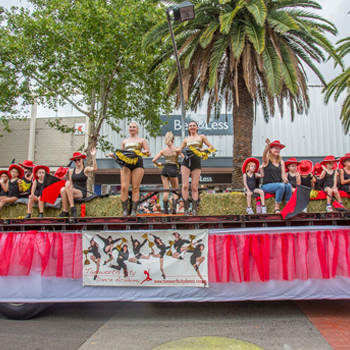